We are deeeply saddened by the death from COVID-19 of the great leader and warrior Bepkororoti, better known as Paulinho Payakan.

Born in the village Kubẽkrãkêj in the 1950s, the son of chief Tchikirí, he went on to found the village A’Ukre. He dedicated his life tirelessly to protecting the forests and guaranteeing the territories and rights of Brazil’s indigenous peoples. He was one of the first of his people to learn Portuguese and like his uncle Raoni he was one of the Kayapó’s most accomplished diplomats. He was famous as a Mẽkabẽndjwỳj, a master of words – everyone was impressed to hear him speak. He had a wealth of knowledge about Mẽbêngôkre (Kayapó) culture and tradition, but he also understood better than any other Kayapó how the non-indigenous world worked. Although he was softly spoken he was astute and incisive in fighting for the rights of his people. 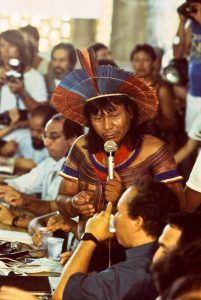 Bepkororoti ‘Paulinho’ Payakan speaking out against the construction of the Belo Monte dam in Altamira, Brazil, 1989

He made good use of his extraordinary communication skills to promote the cause of indigenous rights. He was a cornerstone of the indigenous movement in Brazil and became involved with the growing global environmental movement in the 1980s, building long-standing international partnerships for his people. He was fundamental in creating the main institutions of the Mẽbêngôkre-Kayapó people, including Associação Floresta Protegida (the Protected Forest Association). He was core to the struggle to ensure that indigenous rights were specifically included in the post-dictatorship 1988 Brazilian Constitution and he worked tirelessly to achieve the demarcation of the Kayapó Indigenous Territory. He was also at the forefront of the fight against the Belo Monte dam (then known as Kararaó) in the 1980s, preventing its construction until 2016, when a smaller scheme was built. He was the first elected president of the Federation of Indigenous Peoples of Pará State.

Payakan, your journey ends today in Ngômeiti village, where your relatives will mourn your departure. The indigenous movement has lost a great warrior and veteran of countless conquests. We honor you legacy and continue your struggle, alongside Oê and Maial, your daughters, who follow in your footsteps. It has been twenty-five years since Chief Raoni was accompanied by rock star Sting on a world tour. Sadly, the threats and problems that existed then are still causing problems, and a giant dam – Belo Monte, which will be the world’s third largest – is being built on the Xingu River where he lives.

The Chiefs were here to ask for our help. The interview is moving. Paul Mason said on his blog “It’s one of the most amazing encounters I’ve ever had – and one that nobody in the world will be able to have again if we let development and resource speculation destroy what’s left of the world’s indigenous peoples.” – See more on Paul’s blog

Here is the interview with Paul Mason on Channel 4 News:

It was a great experience. It was very touching how, with the interview completed, all of Paul’s highly professional team just couldn’t wait to get selfies of themselves with the chiefs – and that included Paul Mason himself, who was clearly deeply moved by the meeting!

Photos for the Visit of Chiefs Raoni Metuktire and Megaron Txucarramãe

Photos related to the June 2014 visit are available from the Sue Cunningham Photographic picture library. The gallery below includes photos taken during the visit and historic photos of the two Chiefs, together with a selection of images which illustrate the issues they raised while in the UK.

The pictures are available for editorial use on a commercial license, but a limited selection may be made available free of charge on a limited license for use only in connection with this visit and stories related to it. Photos are not supplied Royalty Free and may not be distributed to third parties or used on the Internet, other than as stated above. Clicking on an image will take you to the Sue Cunningham Photographic site.

Bianca Jagger has written a thorough article in the Huffington Post, timed to coincide with both the coming visit of Chiefs Raoni Metuktire and Megaron Txucarramãe and the start of the World Cup. Well worth a read.