She  founded the charity as a direct result of her first visit to a Xavante community in 1994 and on return to the UK was encouraged under the experienced consul of Tim Miller to set up the Trust. The charity was also fortunate as Sir Professor Ghillean Prance (the then Director of Kew gardens) accepted to be Patron.

The first development initiative to be completed was the “Marimbu Xavante small Health Centre” and medicinal gardens which were inaugurated in 1998. 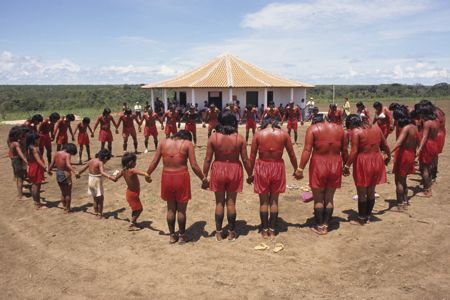 The development of the health centre and medicinal garden was overseen by Emily on various visits between the years  ‘94 – ‘98 working in close consultation with the Xavante indian community and in collaboration with Chief Francisco Pronhopa.

The proposal for the Health centre  was allocated match funding by the governmental office for overseas development aid and the rest of the funding came from donations by trusts and individuals.

Emily guaranteed and insured that all funding was distributed and accounted for by personally drawing up contractual agreements and overseeing the payments with construction and architectural firms in Brazil.

In 1998 she accompanied Germano a Xavante nurse  on a course “Living Medicinal gardens” which is an inspired health development program established by the late  Professor Matos at the Federal University in Fortaleza on the northeast coast of Brazil. Germano then returned to the village and set up the medicinal garden adjacent to the health centre to aid in restoring a value for the Xavante traditional knowledge of herbal medicine.

Solar energy – she further contracted a solar installation company to install and provide solar energy for the power for lights and a fridge for the storage of essential medicines.

Undeniably the health centre has gone through periods of difficulties due to various adverse conditions but in 2016 the Xavante Marimbu community reported that it is currently functioning and is used by the governmental agency Funaca to provide basic health care to isolated communities on the Xavante reservation of Sangradouro. 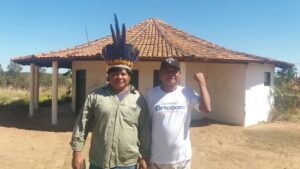 Emily continues to support the Xavante communities in various ways.

Over the years through non specific donations made at performances of her musical production “Into the Amazon” Emily has responded and provided aid for various requests from the community including funding travel expenses for the Chief to travel to a hospital in Sao Paulo for specialist cancer treatment, and for his eldest son to go and collect him and for them both to return to their village where he was able to be for the final months of his life.

Through continued  donations to the Trust In 2016 she helped fund a Xavante video producer Divino Tserewahu by funding maintenance of camera equipment and aiding in the finance of the first Xavante film festival, a landmark event which took place in Barra do Garcas.  She was also able to help with travel expenses enabled  two Guarani chiefs to travel the long journey by bus from Mato Grosso de Sul to Barra do Garcas and attend a public viewing of a video that they were featured in.

Appreciating the importance of video as a means for the Xavante to share their culture, in 2019 she aided in the finance of a video documentary of their festivals throughout a year. The pictures below give  insight into some of these festivals. In 2020-21 Covid 19 has delayed the editing of the film. 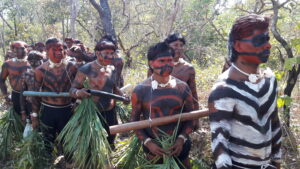 2020- 2021  Emily has been responding to the Covid emergency enabling the purchase of essential medicines post hospitalisation and the purchase of food and necessary items such as masks and soap etc prior to lock downs being implemented in the region.

She helped finance the travel expenses for a family member to provide care within hospital. 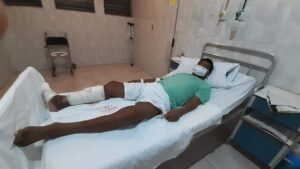 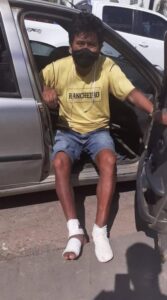 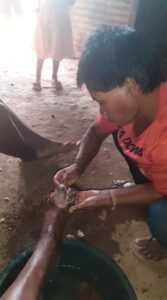 August 2021 Provided aid for the purchase of medicine and dressings for first degree burns.

In July 2021 she financed the purchase of a replacement water pump for the Marimbu community. 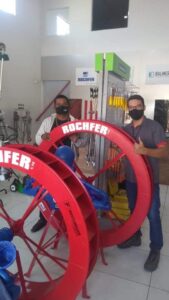 How Emily came to meet members of the Xavante tribe.

Her expansive relationship with the country commenced with a holiday in 1990 and she has converted that landscape and her personal experience into various musical productions.

In 1992 she was invited to perform at the Earth summit in Rio de Janeiro and as a result of her performance encountered elders of a tribe called the Xavante, indigenous to the Mato Grosso.

An intrepid traveller, she accepted their invitation to visit a Xavante village and travelled alone across Brazil on the buses and then off the beaten track and was guest with a chief and his family in a traditional Xavante dwelling. On returning to the UK Emily commenced the process of founding the charity.

Her association with the Xavante was furthered due to their tradition of singing and on the numerous occasions that she was staying with the tribe she was invited to record individuals and groups “choirs”. She also made location recordings of their environment.

These recordings and the experience of this time has been furthered  through various musical productions including her CD  and solo performance “Into the Amazon” which has a backing track featuring some of these recordings and is accompanied by seventy-five projected images of daily life in a Xavante Indian village.

Her performance production  is particularly poignant in the light of global warming, climate change and the expansion in Brazil of mono culture agriculture which is at the expense of the loss of a lot of natural landscape.

Where Emily stayed between ‘94 and ‘98 outside of the Xavante reservation is now a mono culture of soya for thousands of kilometres and the dawn chorus that Emily recorded has been massively diminished.

Some of Emily’s photos of the Xavante taken during the period 1994 -’98 are on  resident display at the “Living Rainforest” centre in Berkshire, UK.

Emily and her profession as a ‘cellist, composer, performer and producer with twenty five years experience of working in the music industry. Alongside her commercial productions her professional material reveals a symbiotic relationship between her music and her philanthropic motivation.

In the eighties she composed music to accompany readings of the book “Sacred Elephant” by Heathcote Williams, going on to perform alongside the actress Virginia McKenna, touring throughout the UK and furthering an awareness of the plight of the elephants at that time.

Her association with tribal people began in 1991 when Emily visited the Senecca Indians of North America and was guest in the house of the esteemed elder Grandmother Twyllah. It was on this visit that she became interested in indigenous singing practices and made recordings of “spirit songs”.

In 1990 she was invited to join friends travelling to isolated areas of the Mato Grosso. This experience was a turning point in her life and her initial response was to curate “In Our Hands”, an exhibition of work by Brazilian artists and photographers promoting the natural environment of the Mato Grosso through their work. She also arranged for the production of fund-raising postcards depicting the Mato Grosso. Further motivated, she commenced the production of her first CD “Earth Songs” which was later published by a German independent company.

In 1992 she was invited to return to Brazil and perform her music at the first Earth Summit in Rio de Janeiro, and associated events in Brasilia. As part of the Earth Summit there was a Tribal Gathering – a forum for tribal people. Emily was a guest at this event and recorded the songs and ritual that the tribal people shared at the end of their meetings and subsequently compiled and produced the track “Vozes da Terra” – Voices of the Earth:

It was at her performance in the National Theatre that she was introduced to elders of the Xavante, who are indigenous to the Mato Grosso; in response to her performance they invited her to visit their village.

Two years later she travelled across Brazil and was guest in the house of a Xavante Chief and his family. Aware that they needed some support she helped members of the community make the preliminary designs for the health centre.

Between 1994 and 1998 Emily made annual visits to the Xavante community and worked in collaboration with them to build and equip the health centre with solar power, to provide basic health care for the village of Marimbu and surrounding villages.

The initiative was supported financially by the UK government’s Overseas Development Administration, the rest of the funding being raised from donations by trusts and individuals. The health centre was inaugurated in 1998.

Whilst researching for the production of her second CD in the North East of Brazil she also arranged for a Xavante nurse to attend “Living Medicinal gardens”, a course given by Professor Matos of the Federal University of Ceará in Fortaleza. The nurse used the knowledge he gained to tend and develop medicinal gardens adjacent to the health centre, and to prepare herbal medicines for the village.

During her time with the Xavante, Emily found music to be as fundamental to their culture as it was to her own life. She was invited to make recordings both of groups and of individuals. She has since integrated these recordings and ambient recordings of their environment into various musical productions including her 2010 double CD release “Out of the Blue & Into the Amazon” and her solo performance “Bach , Burridge & Into the Amazon”, in which she includes projected images featuring the Xavante. 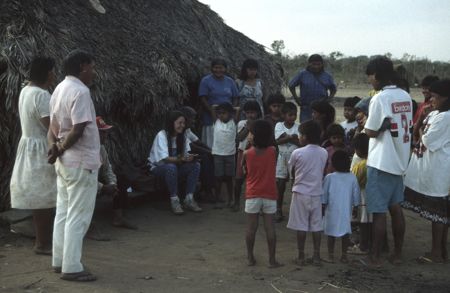 To find out more about Emily’s music and performance productions please visit her website at: www.emilyburridge.com